Since Folke Kobberling and Martin Kaltwasser presented their work to our group in the summer of 2010 I have been thinking about different values different societal strata have. I am relating in particular to one of their pieces titledWhite Trash: 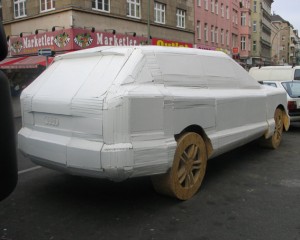 Here’s the information on the piece I found at this site:

“An SUV (sport utility vehicle) will be reconstructed using light-coloured wood and then parked on the central reservation in Karl-Marx-Straße in Neukölln. Over the course of four weeks, this reconstruction of the huge, tank-like Audi Q7 will occupy a number of parking spots. The exposure to the natural elements will cause the wooden structure to swell up, warp and gradually degrade to become white trash.

This piece by Folke Köbberling and Martin Kaltwasser focuses on the way public spaces have become dominated by selfish drivers and a transport policy that seeks to satisfy these drivers. A measure of this problem is the huge increase in the numbers of SUVs on the roads, despite CO2 and particulate matter pollution issues.

The artists have been dealing with the conditions of urban living in their projects since 2002, and they call upon us to go back to the idea of the city as a resource. By using materials that they have found, they offer a critique of the wastefulness inherent in capitalism”.

The thing is that at the time of that presentation my very own “white trash” – my new Audi Q7 was parked under the old yellow crane right outside Emily Carr University… It would be wrong to say I bought that “huge, monstrous SUV” (Folke Kobberling) only out of neccessity  – you know, it is a very spacious SUV – takes all my rolled up paintings, all my studio equipment, wood, paints, etc. That was not the only reason. Another reason that I am not proud of was this shallow desire to show off  – as an immigrant who made it (!), as a former Russian woman (in 1990 when we were leaving Russia only 3% of Russian women could drive a car and only 17% of the population actually owned one). Though most of the world’s immigrants would be bitterly insulted if they were accused of moving for economic reasons only (as yours truly certainly would), the cold facts of our consuming history in the adopted country speak for themselves.

So, on that hot July afternoon sitting on a pile of refused board panels – leftovers from the Olimpic Village kitchens’ construction  which were about to be transformed into the future parts of the famous Bulldozer  piece -  I was thinking what enormous gap lay between my narrow-minded, egocentric self and those enthusiastic tanned German artists, so environmentally and ideologically savvy they even refused to have a car of their own. “Will my children ever grow that conscientious?” I wondered. There was probably, no hope for my generation of immigrants…

Several events that almost coincided this fall made me further explore this feeling of being an intruder – if not territorially then from the point of view of environmental and political awareness I definitely feel like one. First, we finally sold our Edmonton house, and no matter how much ‘stuff’ I donated while packing it up – I could not help but feel what  huge producers of waste we actually became.

Second, my Internship Program takes me to Calgary twice a week. I am still driving my White Trash – just can’t give up that comfort – and wasting way too much gas – oil – S-O-I-L.  Soil that you want to spell with a capital S – like the government officials who say “on American soil” or “on Canadian soil”. With a meaning of a ‘new place for your identity’. I am driving through these beautiful grain and grass fields of Alberta peppered with small (private?) oil pumps that look like some peaceful farm animals browsing in the open vistas… Is this bad to admit that it gives me some satisfaction??? We moved to Alberta because it was one of the quickest economically growing provinces in Canada. That probably rang to our immigrants’ ears as a promise of our future individual growth and prosperity. Safety, success, and a kind of ‘Canadian dream’.

Finally, another coincidence – a very lucky one for my growing conscience (and consciousness) was  coming over the work of Annie Roy and Pierre Allard Attack! This work stirred a layer of relatively fresh memories of terror acts in Israel (the home country we left during the last intifada of 2001). Even the mere fact that this piece ‘travelled’ from city to city (Montreal, Toronto, Vancouver, Calgary) sent a chill down my spine. I know what readings there are. Mine could be just way too close for comfort… It does not prevent me from admiring the piece. According to these two artists, Attack! is a “destabilizing and unequivocal experience whose graphic violence heightens the public awareness of the perverse effects of the veneration of these gas-guzzling, power-hungry vehicles” (Creative Expression, Creative Education, 119). With great interest I read that Roy and Allard had to work hard to prepare the public for the exposure to the piece in Calgary. This amazing sensitivity should leave politicians speechless: “By the time we got to Calgary, it had a different political momentum, as Alberta, with its massive oil sands, is the center of oil production in Canada. You cannot just put a work like this in the environment without getting information and knowing a bit more, and understanding what the potential implications are for the people live there” (121). The artists did their research in Alberta and engaged people who were knowledgeable of the industry and the problem. They accompanied the piece with information to “empower people with knowledge to better understand the problem”. Their piece of art became a point of view. The message was not that “oil is bad, but that it is precious and should not be wasted” (122). 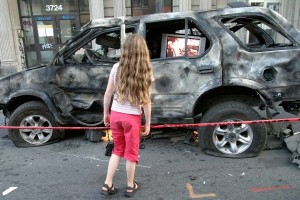 This work is a hyper-realistic scene depicting a terrorist attack incriminating – all at once- the automobile industry, consumers, and governments.

Meanwhile, with all these thoughts, I have been painting a piece with a working title 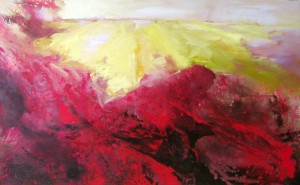