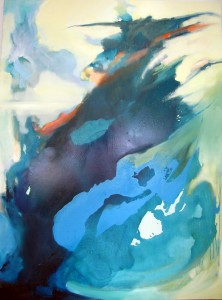 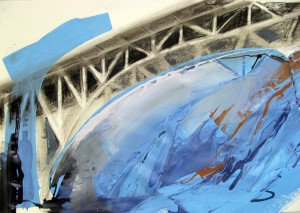 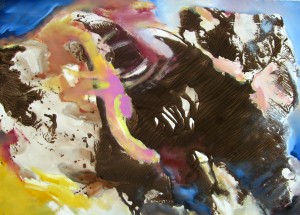 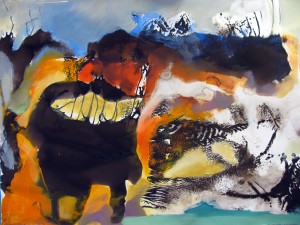 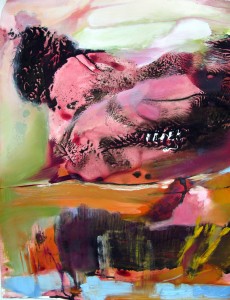 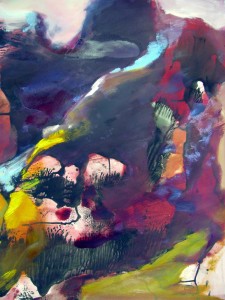 Gulfstream,(fragment) tempera and oil on paper 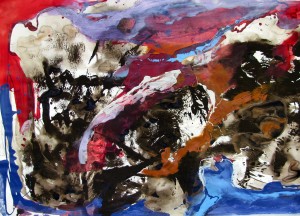 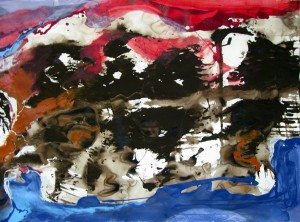 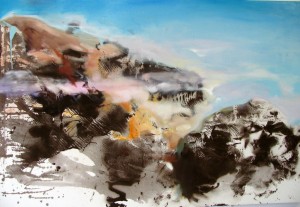 I would like to start this review of my recent findings en route to my thesis with the  distilled interpretation of my essay “Wishful Landscapes” (the initial interpretation was by Ric Bearisto):

Building upon traditions, the practices and the critical efforts of the past, contemporary abstract painters are trying to convey the emerging meaning of their own work in the age of the dominance of conceptually informed art practices. The awareness of the crucial importance of maintaining an analogous connection to the present issues as well as being well-informed of the changing criteria of evaluation and the purposes of judgement makes their art relevant.

Abstract painting can be tied, through the artists’s experiences to the lived experience via the ‘landscapes of the mind’ – the systems we inhabit, the systems our lives depend on.  This environment includes politics and economics, the cultural as an extension of the natural, our bodies as natural systems that pattern our thought, and our thoughts as structured around metaphors drawn from nature.

The second part of this ‘distillation’ is more of a projection on the scope of my future research for the thesis than a reflection of the ideas in the essay; more of a proposal than a summary of the already known. My practice-led research and the research embedded in my paintings of constructed landscapes required extensive exploration of the ideas that are relatively new (modernism was not interested in landscape – it was just a scene for ‘improvement’ which was forcefully imposed on nature): “Landscape was not significant in modern art, but it has become increasingly significant in recent strains of art that are not part of modernism” (Rebecca Solnit, 2003, “Elements of New Landscape”).

After reading “Pittura/Immedia” by Peter Weibel, I have decided to replace the term of “constructed landscape” with “coded landscape” based upon realization that my work actually transmits the message (or conveys the message) in all its urgency and immediacy through the use of a certain code (or codes) that is somehow recognizable and decipherable for the viewers. I believe that my paintings are in (or are striving to arrive at) some polyphonic relations to coded reality and psychological responses.

The terms “temporal simultaneity” and “spacial synchronicity” – in the meaning of thinking about many places at the same time – stroke me as extremely relevant to my work; (these terms were used in the discussion after David Elliot speech at the Center A symposium at SFU this September): the almost forensic evidence of bodily presence in my large landscape pieces speaks of immediate and recent, while the presented subject is often read as places of past experience (or polyphonic references – spacial and psychological experiences that have already taken place). The interwoven space and time phenomenon has its roots in art history, refers to the belief present in many indigenous cultures of the world that space and time is a unity, and is translated into contemporary language of the new landscape art: “Landscape’s most crucial condition is considered to be space, but its deepest theme is time” (R.S. 48)

when several of my classmates described their perception of my work as landscapes similar to ones they experienced confirmed my ideas of codes in the visual, which, in my case always refer to both space and time. Space could be also read as a link to global, global art and reflecting on it the way it was touched upon by Ken Lum at the Centre A symposium: “Cultural conditioning only goes so far… Different peoples have more in common than it might seem…” This is relevant to the theme of my research that relates to the phenomenon of immigration and migration in contemporary world.

When the world around us ceases to be perceived as idyll, as a backdrop or the scenery out there and becomes instead the systems and substances which support us as a part of those systems, we move to an ecological worldview. “The concentrating on the substance rather than form as the bearer of meaning, (italics added) artists assert the decisive significance of substance, rather than regarding it as neutral matter that takes on meaning as it is given form.” (52) This way substance suggests that meaning is inherent in the world, and does not have to be inscribed upon it.  “Here is not the landscape that is absent but the ability to read its language, a lack artists have addressed in works attempting to speak in terms of substances and systems.” (53)

“In the new metaphorical landscape… observation – witness – becomes a form of involvement rather than detachment. All positions are political; there is no outside objective position from which to observe – the viewer… is part of the landscape.” (R.S. 56) We find ourselves in a psychological landscape, in one that is rather an “ecology of systematic interconnection, of relationship, of locality”. (56)

The changes resonate between the psychic and physical landscape, they cross and inform each other. I have realized lately that my tendency to choose large size support for my coded landscapes is often driven by desire to prompt the viewer to immerse into the “reality” of my paintings – almost to the degree my body feels it while I paint. They are created to envelop spectators, seduce them with their honesty and urgency. Of course, the response I get varies. The way we inhabit or read the landscape – either in nature or in art – is determined by our metaphors, by how we live on earth.

This entry was posted in Methodology. Bookmark the permalink.