A wondering Jew is at home only in time (Stephen Kern).

Remembering is never a quiet act of introspection. It is a painful re-membering, a putting together of the disembered past to make sense of the trauma of the present (Homi Bhabha). 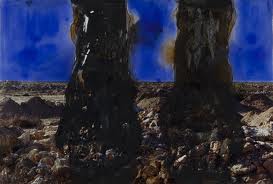 After the first melancholic quote and the second almost viseral one, I am going to make a sharp turn into a more positive way of viewing past experience – in the light of the present ones. During this past month I realized that my work is becoming increasingly focused on what is happening here and now, and less preoccupied with what was left behind, though, of course, culturally charged and colored by it. Being still under the spell of Lucy Lippard’s book The Lure of the Local, I have learned how different individuals, ethnic groups and artists coped with displacement and adjustment to the new social and geo-political environments. The quotes I opened this post with are two of the four quotes she opens Chapter 6, Out of Place with.

The most important message of this chapter for me and my practice could be distilled in the following quotation: “For those of us whose histories have been marginalized, or who have been colonized or displaced, or have lost a ‘heartland’, memories are all we have… we must re-member and re-invent and create new contexts for our histories and ourselves” (66). Somehow my brain grabbed the one verb without the painful “re-” – create as a call for action. Create new contexts  – this is what I should add to my Manifesto. Creating new contexts – is what I have been trying to do but from now on- what I will be aware of doing.

In this chapter Lippard moves from analyzing the ways of seeing the surrounding world by the [displaced] people to accounting for the specific cases of individual and group adjustment’s tools and techniques to suggestions of ways of effective coping with the task of adjustment itself (“create new contexts”). I cannot but fully agree with her thought that “If landscape is a way of seeing, there are potentially as many landscapes as individual ways of seeing, or at least as many as cultural ways of seeing”. The author believes that given a choice, people often immigrate to geographies that remind them of home. I have always believed that otherness and familiarity are reinforced by impressions of landscape. Even while living in a seemingly hostile or totally different world immigrants try to find those similarities however insignificant they might be. “Backgrounds inevitably affect foregrounds” – in this beautifully multi-layered metaphor of Lippard’s, artistic meaning is interwoven with cultural and natural ones. It also echoes Gaston Bachelard’s famous “being here is maintained by being from elsewhere” (The Poetics of Space, 208).

Another important milestone of this chapter for me was to learn how the Bhabha’s liminality or in-between state in which most culturally or geographically displaced persons find themselves, can be described differently, and, fortunately for me, so close to what I have been looking into for the last two months: shelters (!) “Today many [immigrants] live in a hybrid space that can be seen as a shelter between cultures. They are identified by two worlds balancing between where they come from and where they have gone” (62). It can also be called hyphenation or living on the hyphen. While the state itself is nothing new and not particularly appealing to me or generally to anybody, the word ‘shelter’ has much less of the negative connotation the word ‘displacement’ posesses, in my opinion. It has a promise of rest, safety, being… well, ‘sheltered’ or protected. How and when we find that ‘shelteredness’ – that’s another story. Lucy Lippard offers accounts of cases in which groups or individuals “…in their search for a home in this world … created alternative landscapes in art that narrate jorneys, havens, refuges, and freedom… Wilderness, underground and mountaintop – as broad gegraphical metaphors for the search, discovery and achievement of self” (69-70).

Another Bhabha – is a different story which to my mind, cannot be disengaged from Lucy Lippard’s revelations in this post for many reasons, one of them being that her art is one of the most contemporary examples of creating those positive new contexts Lippard is wirting about. (And her famous namesake, who has been quoted here already, of course). Huma Bhabha, a Pakistani-born, New York-based artist ‘on a hyphen’ – believes that “landscape evokes memories like few other things”. Bhabha’s subject matter includes war, colonialism, displacement, and pop-culture. Although she has achieved recognition for her three-dimensional work, recently she has returned to two-dimensional work, “a powerful and provocative choice” according to Modern Painters (Dec 2011-Jan 2012). It realizes in large, overpainted, and collaged photographs. She begins with pictures she has taken of desolate landscapes and abandoned construction sites, she layers the images with “hallucinatory” streaks of ink in saturated colors and sharp gestural figuration. At first it appears as if the photographs are of completely barren places; closer inspection reveals recognizable elements. Bringing together figuration and landscape, she presents a state of decline that seems neither past, present, nor future. The author of the article “Hopeful Disasters”on Huma Bhabha, Heidi Zuckerman Jacobson says that “although the materials in [Bhabha's] work can allude to decay and trauma, they also connote reuse and rebirth through the creative process” (57). (At this point I said to myself: and this is what my practice is really about! I could not quite put it in words… or rather, did not have the right vocabulary for it last year, but now I believe, I do.)

Heidi Zuckerman shared her thoughts on the current political events in North America and in the world as tied to the controversies in Huma Bhabha’s art: speaking of the “occupy” movement and “arab spring” movements as almost simultaneous events she notices that both were often criticized for lacking a “coherent agenda”.

”But perhaps”, writes Zuckerman, “therein lies the root of the problem. Society is too bifurcated for a unified message, and people, values, and ideas no longer fit into a neat and uniform box. Individuality and multiplicity abound. For a long time now, and especially since the emergence of postmodernism, postcolonialism, and feminism, people have resisted socially imposed, reductive identities and meanings” (57)