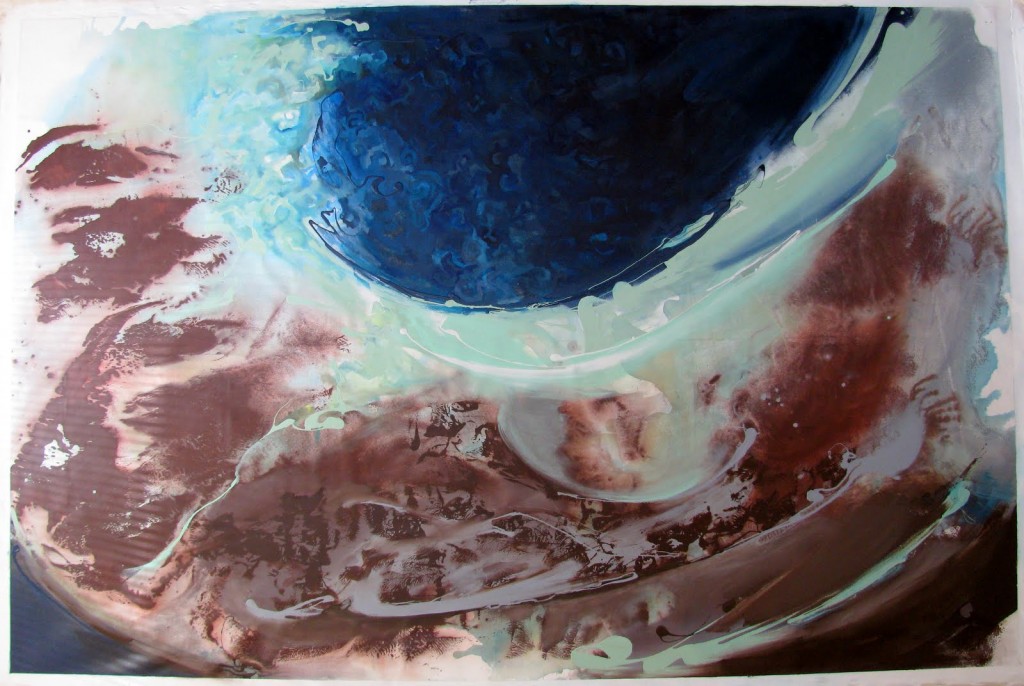 (after Gaston Bachelard  The Poetics of Space, “Intimate Immensity”)

The Poetics of Space was a book of revelations for me (caught in the midst of working out my first thesis proposal draft). It echoed other theories – those of Maurice Merleau-Ponty and Deleuze and also shed some light at the process of creating ‘from imagination’. In my thesis proposal draft I distilled the study to certain abstract painting-friendly and encouraging ideas like: imagination’s “only resources are the great, lasting realities that correspond to fundamental, material images; those that are at the basis of all imagination. Nothing, in other words, that is either chimerical or illusory” (Gaston Bachelard, Poetics of Space, 207).

What I chose was of course, just a tip of the iceberg of a comprehensive phenomenological study employing a thorough research into the process of image- creating in poetry. The chapters of this book are titled e.g., “House and Universe”, “Nests”, “Intimate Immensity”, “The Dialectics of Inside and Outside”, and “The Phenomenology of Roundness”.

When a colleague mentioned this author to me suggesting I should read the comparisons Bachelard makes between desert and the sea – I was immediately hooked. Placing ‘one world upon another’ was definitely nothing new, so I could no longer claim the authorship of that idea. But I gave my vain hopes up with ease – such an engaging and informative read it turned out to be.

In the Introduction the author explains what the study will be about: “The poetic image is not subject to an inner thrust. It is not an echo of the past. On the contrary: through the brilliance of an image, the distant past resounds with echoes, and it is hard to know at what depth these echoes will reverberate and die away. Because of this novelty and its action, the poetic image has an entity and dynamism of its own; it is referable to a direct ontology. This ontology is what I plan to study” (xvi). Bachelard references Eugene Minkowski, a phenomenologist who coined this term of “reverberation” (retentir) to describe the process of image-creating. For Minkowski the essence of life is a “feeling of participation in a flowing onward, necessarily expressed in terms of time, and secondarily expressed in terms of space” (xvi). Bachelard says that in order to clarify the problem of the poetic image philosophically, we have to employ the phenomenology of imagination. Imagination in poetry and imagination in painting seemed to have much in common. Consider this statement, for example: “[the reader of the poem] is asked to consider an image not as an object and even less as the substitute for an object, but to seize its specific reality” (xix). It feels like replacing [the reader of the poem] with ‘the viewer of the painted image’ would make perfect sense in this case.

The chapter that attracted my attention the most was “Intimate Immensity”. This chapter investigates the origins of the idea of vastness and the concept of immensity. The problem under consideration in the work is “participation in images of immensity” (190). Bachelard believes that, “immensity is within ourselves. It is attached to a sort of expansion of being that life curbs and caution arrests…” (184). The philosopher studies Baudelaire’s use of the word ‘vast’ and ‘vastness’ and by doing so explores the concept of “immensity”. He also examines the images of a vast desert and the deep sea created by Phillipe Diole and collides the images of “absolute depth” and “immensity” of the desert after the writer. He comes to the conclusion that “all the universe that bears the mark of the desert is annexed to inner space”. Moreover, he suggests that the outer immensity can be translated into “inner intensity”, and “intensity of being”.

One of the “charms” of the phenomenology of the poetic imagination, Bachelard concludes, is “to be able to experience a fresh nuance in the presence of a spectacle that calls for uniformity, and can be summarized in a single idea” (204). He also elaborates on the sources of imagination when he claims that “fundamental, material images… are at the basis of all imagination…Here both time and space are under the domination of the image. Elsewhere and formerly are stronger than hic at nunc. The being-here is maintained by a being from elsewhere” (208). Bachelard states that immensity is magnified through contemplation. And, since the “contemplative attitude is such a great human value” and “poems are human realities” it is not enough to resort to “impressions” in order to explain them. They must be lived in their poetic immensity (210). To me this chapter of The Poetics of Space is almost intertwined with the concept of Maurice Merleau-Ponty’s concept of ‘embodied being’ “caught in the fabric of the world” and the space of modern painting as space “where we too are located, space which is close to us and with which we are organically connected” (“Exploring the World of Perception: Space”, 42).

Images in painting for me are meant to be ‘lived in’ like the poetic images explored by Gaston Bachelard. They are born in the imagination but spring from the lasting real images of the real world and their palimpsestic traces left in the human mind.