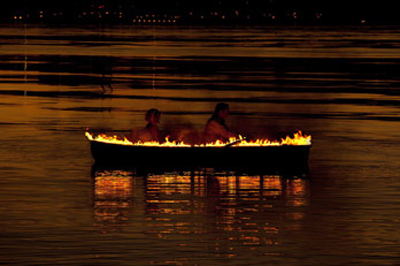 Robert Whitman’s pieces often “verge on alchemy” according to Liz Kotz and her latest article on Whitman’s work in Artforum. What sets him apart from many other artists who embraced technology for producing spectacles however, is that media technologies for Whitman has always been in service of something “at once more grounded and more dreamlike” (193). Whitman uses technological devices to layer different times and places, “exploring and experiential world that is always occuring both here and somewhere else” (193).

Since layering times and places (or referencing them) is the focus of my work, I decided to study Whitman’s findings more closely. Whitman is fascinated by events that can never be captured in their entireity – and only layers of multiple experiences produce the full picture. He goes beyond spatiality when he says he is thinking about making a piece that would happen in two places at the same time. In situ performance that is actually happens in more than one site to me references the idea of “landscape in transit” or “landscape as process rather than a place” in our predominantly unmappable world.

Whitman has been experimenting with the shifts in temporality and spatiality for several decades already. His new work, Passport, is the latest exploration of this spatial dispersion and recombination. In this piece Whitman included several performances at different locations and live feed from “the other side” of Hudson River. Liz Kotz says the piece will “generate the sense that the performance extends into the ebb and flow of events that occur around us all the time”. The artist himself says, “That reach of space is what I wanted”. In that particular piece Whitman wanted to direct people’s attention to the other side of the river while the burning boat is being paddled along. That in his opinion, would create “an expanded horizon of space that people are drawn into” (194).

Combining events or actions that couldn’t possibly occur on the same site and transmitting images of the occasion to where they are not happening is a serious efort in shifting spatiality and temporality. Everyone these days has been exposed to the figuratively perceived phenomenon of this to some extent: tsunami in Japan was imagined and re-lived in Red Deer; images and sounds of Egypt’s uprising filled the homes in Vancouver. Expanding the horizons of outreach for any events, including artistic performances is recent, urgent and overwhelming feature of this time. Nobody is “Other”; “cultural conditioning only goes that far… We all have much more in common than we might have thought” (Ken Lum, lecture at Center A, 09/2010, Vancouver).

I would like to summarize the most crucial points Robert Whitman is making with this work here, the way they correspond to my research in theory and in practice:

1. Exploring the shifts in temporality, spatiality, and subjectivity that imaging and communications techniques bring in daily life.

2. Layering different times and places, exploring an experiential world that is always occurring both here and somewhere else.

4. Incorporating language in the pieces, where the voice comes fron another place.

6. Exploring subjectivity: no two people have the same experience. (And only combined in their multiplicity they create a more adequate picture of the event).