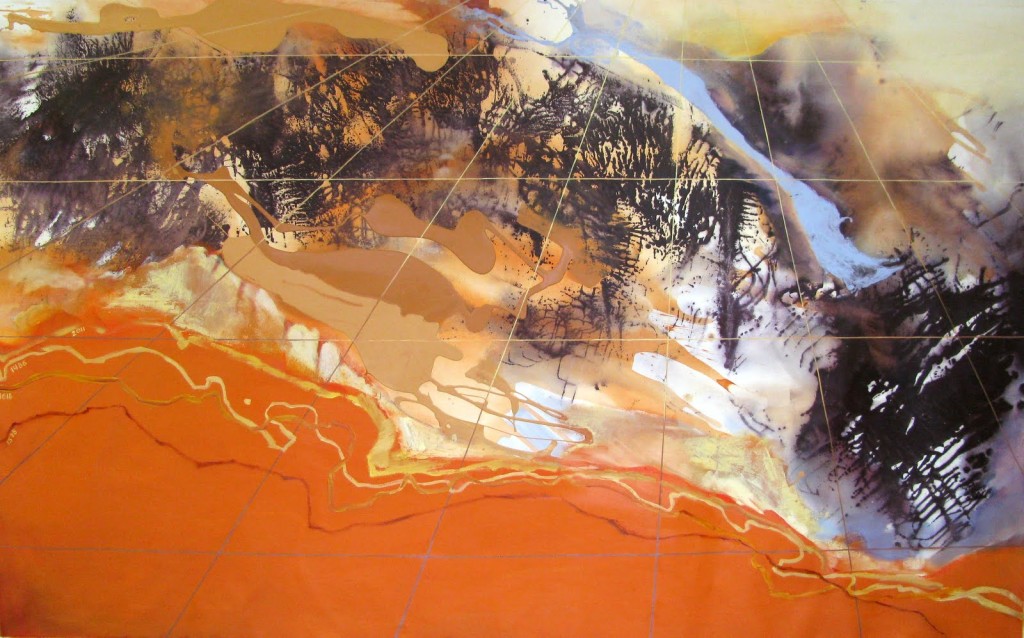 Promised is a reflection on and my own rendering of the hot political landscape of Israel framed by the current shoreline (artistic rendering) and doubled by the projected shorelines copied from the ancient maps. I felt the shorelines had to be painted in oil, as their creation originally was the depiction or projection of hope on the unknown. It makes them passionate and uncertain, artistic more than accurate, and fragile and personal as opposed to mass-printed and self-important. The earliest map I found in the book The Jewish Book 365 Days which comprises different relics from the collections of The Israel Museum in Jerusalem was drawn in the thirteenth century, but was re-drawn from an earlier one. There were 12 old maps in that book; some very meticulous, some – naive. One of the maps from 1594 depicted the map of Asia in a shape of a winged horse. Behind the rear legs that were marked as “India Meridionalis” and “India Orientalis” was the region which still hosted dragons. And while very decent maps were available from Spanish sources by the middle of the 16th century, the re-drawn maps of the Holy Land kept preserving that naivety of hope projected onto land.  One of the Dutch maps from 1629 still depicted monsters guiding the shores of Israel. The Jordan Valley and the Dead Sea are distorted and imaginary in that map – and so they are in my painting, with the Jordan River starting up above the land. I found out that it was a tradition to mix real with legends in the maps of the early days: e.g., The Map of the Holy land ca.1630 by Gerardus Mercator (1512 – 1594) incorporated the story of Jonah and the whale which literally takes place in the beautifully drawn waves of Maris Mediterranaen.

The shorelines in those maps were of particular importance as they were the first glimpse of the promised land. I also marvelled at the many names for it: Terra Sancta, Hebraeorum, Israelitarum, Terra Chanaan, Terra Promiffionis olim Palestina, and the Land of Promise.

I ‘citated’ the shorelines of three old maps in my painting:

3. 1618 – by Gerardus Mercator after Ptolemaus’s Geographia -a hand-colored engraving on paper.

Postscriptum: After I posted this description last week, I got a new book, recommended to me by Dr Megan A. Smetzer – Landscape and Power edited by W.J.T. Mitchell. Two articles of that collection seemed exptremely relevant to my work on Promised: “Invention, Memory, and Place” by Edward W. Said and “Holy Landscape: Israel, Palestine, and the American Wilderness” by W.J.T. Mitchell. being familiar with the work of Edward W. Said and his Orientalism, I still found his article very informative. His view of tradition and memory as “social, political, and historical enterprise” (244) as opposed to something authentic captures the essence of the negative experience as felt by the other side in the conflict. Memory, especially collective memory (as well as communal identity) can be fabricated and serve the needs of a political argument.

I found Mitchell’s article even more revealing in the light of my search: “The perverse logic of holy landscape seems to turn it from god’s gift into an obscene idol that demends human sacrifices” he writes (262). Mitchell argues that landscape is capable of becoming an idol or a potent ideological representation that serves to naturalize power relations and erase history and legibility. He further criticizes the Western tradition where a landscape is an abstraction from place and a “reification of space”, in which ignorance, or “wilful unknowing” is central to the concept (265). I felt it was amusing that my Promised, already a bitter irony on the naive cherished hope of acquring a “Holy Land” that was inevitably crushed by the harsh reality of the actual place and the conflict inherent to it, was a painting with both sides of the conflict in mind. So, as one of G-d’s ‘chosen’ people and as one who savoured quite a lot of harshness and suffering in that land I produced a visual image that sort of denied itself. Mitchell views a tourist to the land as an ignoramus, or “gastarbeiter, the migrant worker who brings nothing but some skills developed elsewhere” (264). And while I personally fit into that definition of a wonderer, I also ask myself how long you must stay in the land, or for what reasons excluding the dictionary definition of “nomadism” ( not Romantic but the original a person who changes location because of the changing needs) you have to come to Israel to be able to pass judgement, or call the memory your own. I can not claim the authenticity of my own experience or my memories – but who can? Does one have to be born in the land to have this right? Or is it so when your own children are born there?

Mitchell claims that all deserts are imaginary (272). This statement holds solid with me. Forgetting is part of the memory function. Forgetting and transforming and then using this image as transplaced and projected on the new places – is exactly what I am exploring in my art. Projecting half-forgotten onto the new and unknown is as well. For some reason, however, I would not accept the blames in “Romanticist” vision or rendering of places. I am an immigrant – a person on the other side of all the pretty, appealing, and at the same time revolting that connotates the words “nomads” or “authentic experience” – I was not searching for any authenticity when I moved (not traveled!) to Israel. I had to survive there. Blaming Romanticist approach on refugees or immigrants could be compared to accusing 19th century Japanese in the phenomenon of Japonisme.