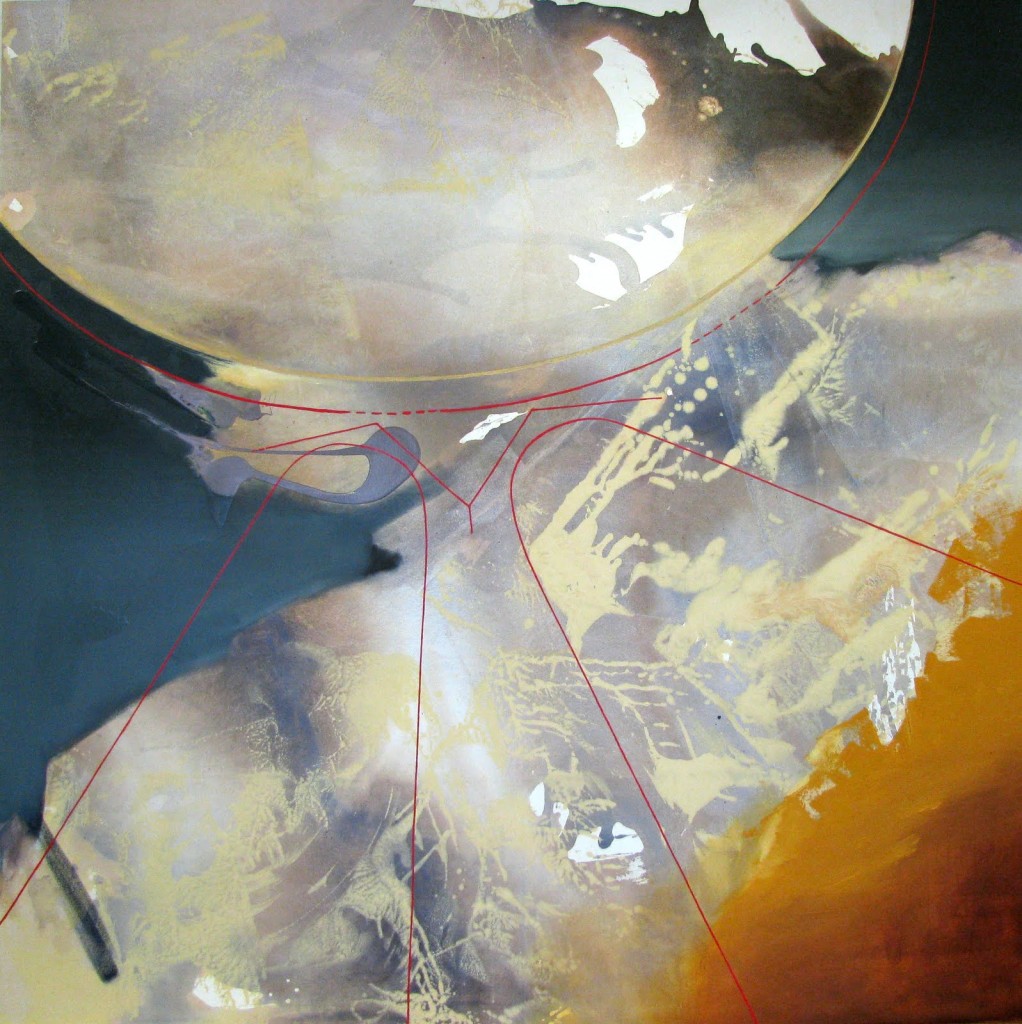 Duomo is a work in progress, a week into making. The idea behind… no, I feel it will be more appropriate to say “the idea of this painting” came from the passionate article of W.J.T. Mitchell, the Distinguished Service Professor of English and Art History at the University of Chicago, ”Israel, Palestine, and the American Wilderness”. Here I will have to stop myself again and say that I do not expect the viewer to see all I am about to discuss here in the painting itself. The project-in-the-making is an embodied experience for me, or an embodied thought. Mitchell  ignited my imagination by saying that first, “all deserts are imaginary” (268) and second, that “all the three religions of the Book… invented ‘promised lands’ for ‘chosen people’” (275).

I started to think about the fragile yet resistant fabric of which certain beliefs were made. It could only be that pertaining and attractive if a [legend], a tradition, or an idea corresponded to or was made of some earthy material.  That is how the idea of making a dome (an archaetectural element characteristic of all major religions) out of the ‘desired landscape’ material itself came to my mind.  Circling the dome off and thus separating the earthy from the heavenly felt almost like blasphemy. Immediately came to mind the humbleness of the pair “adam – adama” in Hebrew – meaning ‘man – earth’.  It stresses the deep connection of man to the earth. (I am not sure if this pair is that obviously joined in any other language). Joining the Earth and the sky – or the earthy and the spiritual was just the next logical step closer to Mitchell’s theory. His article also evoked the story of the Sienna Duomo (the Sienna Cathedral) whose building started in the 9th century but continued till the 14th till the buiders “re-discovered” the secret of building a dome which the ancient Romans certainly knew while building the Pantheon, and which was lost later. The irony of the fact that a later civilization was not as grand as the earlier one made me smile when I first heard the story. This year, it served as a proof to me that people do build their beliefs from earthy fabric.

Another “duomo” that has to be incorporated into this piece of writing is the Dome of the Rock. “In the symbolic landscape of Palestine, the most intense concentration of holiness for all the three religions of the Book, is, not surprisingly, the cityscape of Jerusalem, and especially the site of the Dome of the Rock” (271). The color scheme of my Duomo was inspired by the beautiful dome of the Szeged Synagogue in Hungary: 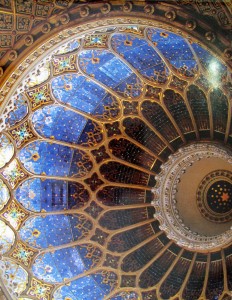 The dome of the Szeged Synagogue, Hungary.

I decided that to ‘prop’ my dome I will use the blue-print or a sketch of the internal architectural structure of that synagogue, but staying in tune with W.J.T. Mitchell (even if  altering his theory a little) I will paint my ‘blue-print’ with the arterial-blood-red. That author insists that “deserts are texts written with stones and bones” (272), and that the landscapes of all ‘Holy Lands’ – be it Kosovo, Ireland, the Americas, or the South Africa – became at some point idols demanding human blood and sacrifice. In my mind I add that the blood that is spilled usually belongs both to the conquerors and the conquerred. However, such generalization and calling, among others, the few emaciated survivors of the Holocaust arriving at the shores of Palestine “conquerors” feels very, very wrong.

Deserts are imaginary because they are rarely deserted. They might be not as densely populated as the land from which the conquerors come, but they are definitely not bare. The ambiguity I spotted in the terminology used by Mitchell (taking into account that whatever euphemism of a country name he is using, he is building a strong case against the politics and the founding of the state of Israel in the land of Palestine in this particular article) was his touching upon the concept of ”the white man’s burden” in connection with the necessity of developing and populating the land of opportunity. Since when I wanted to ask have Jews been considered “white” men and not “Others”? The Soviets always referred to me [us] as “…and the other minorities”. The word ‘Jews’ or ‘Jewish’ had been a taboo, a nusance or a curse in Russia - the word not to be mentioned - since the death of Stalin. They were also ‘marked off’ in America together with ‘colored’ and dogs for over a half of the 20th century.

History is complicated. I am not trying to politicise my art or force any negatively-charged reading upon the viewers, but these were the thoughts that passed trough my mind when I was reading W.J.T. Mitchell’s article and while I was starting to work on this painting.