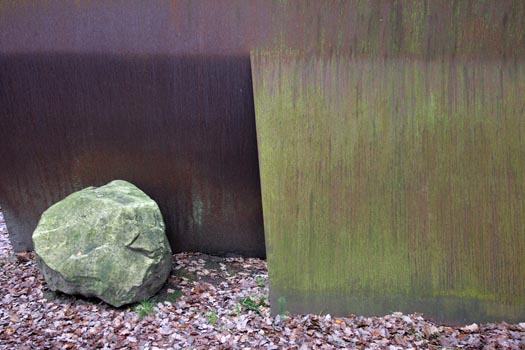 Preceding his coming major retrospective at Guggenheim Museum in New York this summer, this article on Lee Ufan’s work and credo in the May’s Artforum seemed quite modest – rather compact for a figure of his calibre. In the light of our new course, titled “Dialogues and Interactions” this artist’s and theorist’s beliefs can be very valuable to look into. To me it also has a link to our discussions with my supervisor of the “dialogues with art history every artist is involved in his or her practice”. There are also a few facts in this artist personal life that resonated with my own experiences.

Lee Ufan, a Japanese born and raised in Korea and educated in Japan, was one of the founders of the Mono-ha, or Things school. The way the artist himself describes it in one of the interviews he gave this spring, Mono-ha is “simply a way to connect things that are seen and not seen and things that are on the outside and on the inside. This form of art may look simple, but it pushes us to think about unseen notions, such as concept, location and time behind a work of art.” (Lee Ufan’s interview with JoongAng Sunday at the Kukjie Gallery in Seoul, May 17, 2011). The Mono-ha movement was used to criticize Western modernism. Lee Ufan is called a “pivotal figure” in tansaekhwa, (monochromatic painting) one of the most prominent artistic developments in twentieth-century Korea, “which offered a fundamentally different approach to modernist abstraction” (Artforum,133). The cornerstone of that approach lies in emphasizing materiality “as the means by which to produce “encounters” that would connect objects and viewers, which in turn would show the “world as it is” (133).

What interested me most in the article offered by Artforum was the fact that Lee Ufan turned to painting in 1973, when artists in most parts of the world “had all but left it for dead” (133). Moreover, he was addressing the history of modernist abstraction, turning its best-known paradigms  – seriality, gesture, the grid, and the monochrome – and “turning them inside out via alternative conceptions of the mark, the edge, and the surface” (133). He was bravely proposing “correspondence” rather than difference, as a means of “rethinking a world divided by conflicting ideologies and national boundaries”.  I perceived this fact also as a manifestation of contact (or reserved criticism) as opposed to open opposition and hostility which marked similar “encounters” of that time. Quiet re-thinking instead of a full-blown war. Lee Ufan admits he was “discriminated” as an artist without a degree in fine arts and had to “fight in order to survive”, he was not considered a Japanese artist at some point because he grew up in Korea, the Korean people treated him as a Japanese person, and “the Europeans ignored [Lee Ufan] for being an Asian artist. However, his optimism prevailed.

For more information on this artist I turned to Joan Kee’s article “Points, Lines, Encounters: The World According to Lee Ufan”.

I learned that Lee Ufan among many attended Roland Barthes’ lectures approximately a year before his essay “The Death of the Author” was published, and became one of his followers. He criticized the notion of making – on the grounds of its “modernist lineage”. Identifying artistic intention as a necessary component of such “making”, the artists of Mono-ha proclaimed that “if the objective or intention of the work is not clear, a work cannot be said to have been made.”  Then whether a work is made or not will depend on the clarity of creative response. This was the logic of one of lee Ufan’s fellow-artists Suga Kishio.

Lee Ufan’s series “Relatum”, 1968-, created a new model of interaction between the artist, the viewer, and the artwork: the one, based on parity.